The Campus Men’s Action Network (CMAN) is an organizational model developed by Jana’s Campaign that encourages college men to develop a campus coalition and actively engage in the work to end gender-based violence. The Campus Men’s Action Network, and this website, provides a structural framework that assists men wanting to network together and mobilize themselves to build a campus culture of respect for women.

Today on college campuses, one in five women will become a victim of sexual assault during their college experience. College women are also the victims of intimate partner violence and stalking at alarming rates. We believe men must become allies in the movement to end gender-based violence by first redefining what it means to “be a man”. First and foremost, this requires an end to the compliance of the idea of male domination in our culture by dismissing sexism and no longer accepting gender inequality. Many men want to be part of the solution and be agents of change. However, most don’t know what to do or how to get started. The Campus Men’s Action Network provides a practical model that includes example mission statements, core principles, and programming ideas to help men get started. The ultimate goal of this work is to encourage good men to begin the hard work of transforming the campus culture and to end gender-based violence. The philosophy behind the Campus Men’s Action Network is built on the work of Alan Berkowitz (Berkowitz Consulting), Jackson Katz (Mentors in Violence Prevention), Tony Porter (A Call to Men), Rus Funk (Men’s Work), Todd Minerson (White Ribbon Campaign) and many others.
​
If you believe, as we do, that men are essential in the process of eliminating gender-based violence, it’s time to get involved. Get started today by forming a group of interested men who want to address gender based violence. The purpose of this website is to provide a structure and outline for men who want to get involved. It is our hope this material will serve as a resource for all men, whether on a college campus, at work, or in their communities, to use in order to build their own men’s action network, with the ultimate goal of ending gender-based violence.
Printable  PDF
Why men must get involved 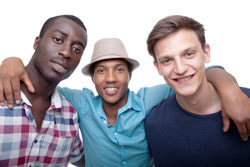 College women continue to be at high risk for gender-based violence, which includes domestic and dating violence, sexual assault and stalking. The Bureau of Justice Studies indicates that women ages 20-24 are at the highest risk of dating violence, one in five women (20%) experience sexual assault in their college years, and young women ages 18-24 are at the highest risk of stalking. While we recognize that men are also victims of relationship violence, their percentage rate is much lower however. The First Report of the White House Task Force to Protect Students From Sexual Assault (2014) calls on universities to take more responsibility in the safety of their students, particularly when it comes to issues of sexual assault and intimate partner violence. As one of its top priorities, the Task Force calls on campuses to engage men in this work.

We believe men must join women and become allies in the movement to end gender-based violence. While most men never use or support violence, the simple fact is that men are the overwhelming perpetrators of gender based violence. The root cause of gender violence often can be narrowed down to one or all four of these environmental factors:

1) Fundamental conditions of gender inequality. Some men see themselves as privileged and see women and girls as property to be owned.

2) Harmful, violent and controlling aspects of masculinity. Some men see the use of power and the use of violence to control women as an acceptable part of being a man.

3) Personal history of one’s own trauma. Some men have not properly dealt with their own childhood memories as witnesses or as victims of violence themselves. This trauma can sometimes result in the replication of dangerous behaviors.

4) Male culture where most men and boys do not intervene or challenge other males who are violent. They instead 'cover for their buddies'.

Jackson Katz, world renowned anti-sexism activist, believes we need to first redefine what it means to “be a man”. This requires an end to the compliance of the idea of male domination in our cultures by dismissing sexism and no longer accepting gender inequality. He also challenges the negative impact of masculinity. “Boys are taught and thus learn from an early age that being a man means being powerful and in control; violence is an instrumental means of gaining or maintaining that power and control.” In order for men to begin to eradicate gender-based violence, they must first accept a new idea of masculinity, one of love and respect towards women and girls.

So, why men? We know only a small number of men are perpetrators. We also know however, most gender based violence is committed by men. And yet for too long, violence against women has been seen as a women’s issue. As Katz states, “Men have been largely erased from much of the conversation about a subject that is centrally about men.” But the larger majority of non-violent men need to do more than live a life of non-violence. “When we empower men to step in when someone’s in trouble, they become an important part of the solution.” Violence prevention expert Tony Porter conquers and says “This is a man’s issue.” He believes that preventing partner and sexual violence is ultimately the responsibility of men. Good men need to role model respectful behaviors, but also speak up and step in to stop inappropriate situations. On the field, in the classroom, at home or at the bars, men need to intervene when conversations, behaviors or actions of other men are disrespectful of, or endangering to, women. By doing so, men begin to change the culture of their friend groups, families, campuses, and communities to one that prevents gender-based violence.
develop a network of men 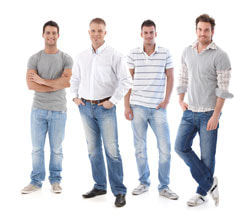 ​This framework is built on the idea that men, non-violent men who support gender equality, have a shared interest and willingness to join together around the issues of reducing gender-based violence. CMAN calls on men to create a brotherhood coalition and a space where they can gather and network in support of this cause and each other. This coalition is a place that provides support, helps build confidence, hold each other accountable and empower each other to be agents of cultural change.

Your network of men can be organized in several different ways to best fit your situation and environment. For example, your group might best operate as a loose alliance of men or maybe a more formal structured student organization or club is needed. This program model could be utilized as part of an existing organization (fraternity, athletic team, etc.) or could be developed as a stand-alone group that focuses solely on gender-violence issues. It is also likely that your network will evolve over time to best fit your environment and organizational factors.

One of the first steps in developing your own men’s action network is to develop a powerful and straight forward “mission statement” that sets the direction for your group. We have attached samples of mission statements by various men’s groups who work to reduce violence against women.

​Additionally, we believe that your men’s group should have a symbol, or various symbols, that helps identify yourself, and other men, as part of this group. This tells others how you feel about the important issues of gender equality and reducing gender-based violence. We have attached a sample logo that you can adapt to your own group or club.

This logo is adjustable.
principles of a campus men's action network

10 Things Men Can Do to Prevent Gender Violence

Rape Is A Men’s Issue

What Men Can Do to End Relationship Abuse and Sexual Assault

Walk a Mile in Her Shoes http://www.walkamileinhershoes.org/

Where Do You Stand? http://www.mencanstoprape.org/Strength-Media-Portfolio/preview-of-new-bystander-intervention-campaign.html

Where Is Your Line? http://whereisyourline.org/

Are You That Someone?

No Means No Campaign

A Call to Men – Tony Porter

Be A Man – Joe Ehrmann

http://amensproject.com/ This website is full of great resources on a variety of issues. In addition to resources on domestic violence, rape and sexual assault, and violence in general, there are also links on healthy masculinity, youth violence, and fathering.